Our system comes with everything a pet owner needs for easy, hands-free treatment sessions: a battery-operated treatment device and comfortable, washable convenience vest to hold the device in place. 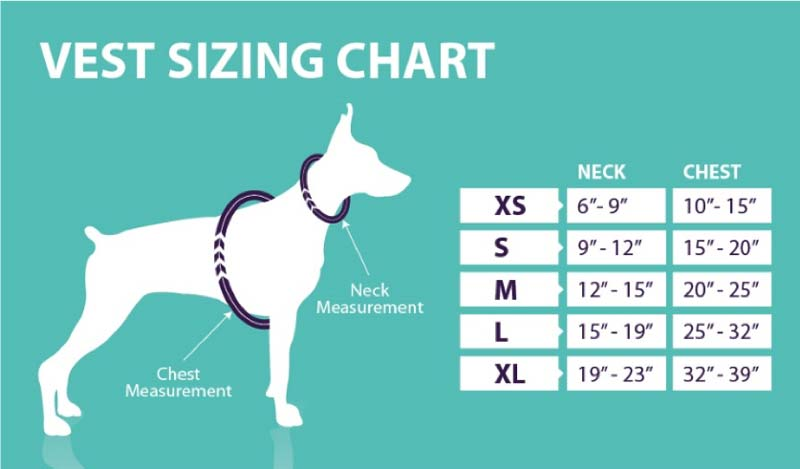 Calmer Canine helped Lou’s separation anxiety, and also her stranger, general and travel anxieties. She started to see improvements in her separation anxiety signs in the first week of use. She seems happier overall and able to settle easier in travel and social situations. It produced good results in Lou’s case. If someone is willing to try to make their dog’s life more comfortable, I think this could be a good option.
Erin B. – Lou’s owner

Lou was able to be left alone for almost 1 hour without any other intervention which has never occurred before. It also helped with her stranger and travel anxieties, as well.
Dr. J. Posey – Lou’s veterinarian

Cooper was so anxious he was injuring himself while being destructive to our home and by chewing his legs. Thanks to Calmer Canine, he does not do this nearly as often and is not hurting himself when it occurs. It is easy to use and we saw improvements in a short period of time.
Brittnie B. – Cooper’s owner

Yaz’s anxiety was really horrible at home in his crate and out of his crate when I wasn’t there (even though my husband was). After using Calmer Canine, he no longer panics when I leave, and my husband is there. He no longer follows me around the house from room to room all day long. He can sleep and relax without worrying where I am in the house. He also calmed down without any medication in his crate when left alone after about 15 minutes. He actually puts his head down and relaxes-which he never did before Calmer Canine.

Living with a dog who has separation anxiety can give the human anxiety as well. I think this simple treatment can help improve the panic in many situations that my dog felt. It is painless. It is easy. It was part of our routine each day-morning food, treatment, evening treats, treatment. I didn’t have to sit and hold him. He could do as he pleased. It was a win:win for us.
Heather C. – Yaz’s owner

After three weeks of using Calmer Canine, Riggs’ general demeanor changed and he is now calmer in new situations and also more relaxed at home around our 9-month old baby. His signs of separation anxiety were gone within three weeks of use. His other signs of anxiety, such as reactivity to the doorbell, also disappeared after three weeks.
Alexis M. – Riggs’ owner

Riggs showed fairly dramatic improvement within 7 days of starting his treatment. He used to pace obsessively and pant heavily in the clinic, but he was sleeping in the clinic within a week of starting his treatments. He has also been able to settle near the owner’s young baby. I am now recommending Calmer Canine for thunder phobia, noise sensitivity, stranger anxiety, general anxiety, travel anxiety and situational anxiety in the veterinary clinic.
Dr. R. Moland – Riggs’ veterinarian

I would recommend that others try Calmer canine. Hope’s anxiety behaviors improved during the Calmer Canine sessions and shortly after but her panting and pacing continued some throughout the day.” She tolerated treatments well without any side effects.
Julie Fulcher – Hope’s owner

This pet had severe separation anxiety. It might be helpful to continue treatments for longer than six weeks. I would also recommend Calmer Canine for thunder phobia, noise sensitivity, general and travel anxiety.
Dr. D. Bose – Hope’s veterinarian

Calmer Canine was very easy to use and the instructions were very easy to follow. I’m not using any other protocols right now except Calmer Canine. Tiki seemed to improve around three weeks into the treatment. Her excessive vocalization went from severe to mild. She has thunder phobia and general anxiety. I think Calmer Canine is another tool in our toolbox to help patients with separation anxiety. As with everything else, nothing helps every patient perfectly.
Dr. K. Thompson – Tiki’s owner and veterinarian

The device seemed to relax him immediately – it was magic! It certainly improved his general anxiety. It seemed to also improve his separation anxiety (destruction and vocalization) as long as we kept to a routine. He was still hyper-excited when we returned home. I would recommend this device to others with anxious dogs. Burdock had moderate to severe separation anxiety when we started so he is probably one of the more difficult cases. Burdock still required a routine and whenever his routine was changed, we basically had to start over as he was bad for a few days. However, we saw mild improvement within 48 hours and we think that he is much better than previously after the full 6 weeks. We have decreased his behavior medications (Fluoxetine and Trazadone) and he seems to really enjoy wearing Calmer Canine.

UPDATE: Just a little update on Burdock. Since using the Calmer Canine system, we have been incredibly impressed with how long lasting the effects have been. When I used the system, his entire world had changed; we moved halfway across the country and for months, he was in a household with someone home at all times (my parents). So when he came to Chicago with my husband and I, it was understandably a difficult time for him. Calmer Canine and a routine helped significantly and I think it honestly got him through his worst separation anxiety. He is rarely a problem anymore. No barking, no digging, no hypersalivation. He gets a little overly excited to go into his crate, but otherwise he is not a problem and does not decrease our quality of life. We have been using the Calmer Canine monthly to maintain his improvements and I really appreciated the chance to be in the study.

My dog Suffie suffered from acute anxiety from thunderstorms. Since I live in south Florida , we have storms very often. As the storm approached, she would start panting, pacing, then jump on my lap and start trembling. There was nothing I could do to help soothe her. She even refused treats! After a few treatments with Calmer Canine, when the first storm approached, she would start her panting but she wasn’t trembling! I could distract her by rolling a ball on the floor and she ate treats! I was skeptical at first but I watched her anxiety go from a 10 to a 2. Sure wish I had bought this sooner!
Jill Z. – Suffie’s owner

Is Calmer Canine right
for your dog?

If your dog is "acting out" whenever they're left alone, they could be suffering from separation anxiety. Our quick, free Quiz will help you unravel the mysteries of your dog's behaviors.